Case Study #109 - Man Suffered For Over 8 Years With Sciatica and Back Pain Due To Trauma, Has His Pain Relieved Completely With Our Treatment

Case Study #109 involves a 58 year old male who came into our clinic in agonizing pain. He had suffered a trauma to his back over 8 years earlier; and while the pain had been manageable at first, it had gotten to the point now that it was excruciating and was affecting every part of his life. Every decision he made or every thing he wanted to do now depended on how his back felt. He needed to do something to relieve the pain, and because he had already suffered a back trauma he didn't want any invasive procedures in the area, such as surgeries or injections. He thought he might be out of options until he heard about the Illinois Back Institute.

When the patient first entered our clinic, it was clear he was in a lot of pain. We asked him what the pain was and he said it began in the back and traveled down the legs, which sounds like a classic case of sciatica. Then we asked what he felt his pain was like on a scale of 0 to 10, with 10 being the worst pain imaginable, and he said it was a 9. The way he was walking and the limited mobility he had certainly seemed to back that up. We then asked him questions to get his score on the Oswestry Disability Index (ODI), which is indicator that doctors use to measure the level of a patient's disability.

On a scale of 1 to 100, he scored an 80. A score of 80 is considered a Crippling Disability, where pain affects every aspect of a person's life.

People with a score that high require a doctor's intervention to try and improve the condition because it cannot improve on its own.

We next asked the patient about his medical history. He explained how he had been to see a total of 3 different doctors since he suffered his back trauma. They had sent him for tests including an MRI, and prescribed a few different treatments, including Chiropractic therapy, pain pills, over-the-counter medications, and NSAIDs. When those stopped working the pain and sciatica returned worse than ever. The doctors' next recommendation was for either epidural injections or for surgery, but those were treatments that the patient would not even consider. He had heard too many stories about injections or surgeries that went wrong and made the pain even worse, and after suffering the back trauma he did not want to risk it.

Now that we knew the patient's history and had his MRI, we could study it to find out exactly what his problems were. It was obvious that the patient was suffering with Sciatica, but what was causing it? There are five causes of Sciatica, which are:

After studying the patient's MRI it was determined that of those causes of Sciatica, he had each of the first four! He also had radiculopathy, which is basically a pinched nerve. We knew our treatment could treat each one of those problems, so we got started immediately.

After this man suffered his back trauma, he wasn't sure his back would ever feel better again. But our treatments were able to heal his damaged discs and relieve his sciatica pain completely, and without the need for drugs or surgery. If you are suffering with back pain and sciatica caused by a trauma or wear and tear or anything else, we can help! 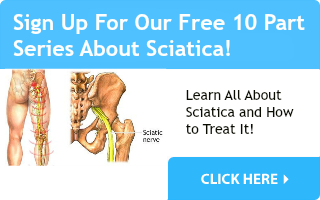