Part of my objective is to help patients understand you do not have to live with your pain any longer. I will be writing weekly about patients that have been suffering and were able to eliminate their pain at the Illinois Back Institute. My goal is to give you a brighter futureand help live pain free.

41 year old male construction worker entered our clinic complaining of sever back pain and leg pain. He has been experiencing the pain for 3 years and recently the pain was getting worse. His pain had started after lifting a heavy object at work. The pain when he first injured his back was not too bad but slowly the pain started getting worse. By the time he entered our clinic his pain was an 8 on average. On a bad day his pain level was up to a 10(10 being the worst).

He had seen his primary doctor and was taking an occasional medication, he stated that the meds did not really help and did want to take them if they are going to solve the problem. He went for physical therapy at a local traditional Physical Therapy clinic but again his pain did not go away.

He had seen our Television show and thought "What do I have to lose." He knew he did not want surgery so thought he would give Illinois Back Institute a try before seeing a surgeon. When he started with therapy his pain was an 8 and his ODI (Oswestry Disability Index) was a 56.

The ODI is a tool we use to identify the effect pain has on your ability to function in everyday life. It is considered a standard in the industry for identifying the severity of pain. It is scored on a scale of 0-100, 100 being the most severe. A patient that has an ODI above a 35 for long periods of time will often be a candidate for surgery. When somebody has a score at the level of 56 on the scale their life is severely compromised in all aspects.

Our objective was to eliminate his Herniated Discs that were causing the back pain and sciatica and then restore normal muscle patterns and strength.

On day one of treatment his pain was an 8 and his ODI was at a very high 56. After just 12 treatments the pain in his low back was down to a 2 and his leg pain (sciatica) was a 4, and his ODI was a 14. He was feeling much better and was cautiously starting to live his life. 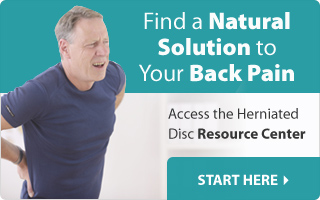 After his 24th visit his pain in his back was at a 0 and his leg pain decreased to a 0. He had some complaints of stiffness in his back but the pain was gone. His ODI was scored at a 4. His posture and strength continued to improve and he was dismissed from care after 26 visits strong stable and pain free.

P.S. If you have been diagnosed with a herniated, bulging, or degenerative disc or sciatica, feel free to request a free consultation to see how we can help you relieve your pain without surgery.